On this day 41 years ago the Earth slid through this section of space, vibrating plasmas and molecules which could be heard to whisper "Umour!"
Posted by Em at 10:52 AM 1 comment:

Greetings to all and happy (not so new) New Year. Well, it’s good to be back… back in the saddle again. No, I hadn’t dropped off the face of the earth or left the country (although, believe me, I’ve been tempted)…The Loudmouth has just been busy moving. Exiled further into suburban hell. One doesn’t have to be Nostradamus to foresee which direction this is going...A roof over mi head now-soon to be a doddering old fool, ambling about the estate with a weed-sticker for 25 cents a day and a nip of rum snuck behind the pantry door,but I digress. Yes, comfortable suburbia, where the edict is “conform or be absorbed by force”. Which reminds me of the only still-relevant commandment, “Thou Shalt Consume”. Wretched consumption is our national duty. Anything that might interfere with the urge to consume must be eradicated immediately, as a matter of National Security. Are we feeling a bit melancholy today?… somewhat introspective, perhaps?… Maybe we might be questioning the political motives of our leaders and this is causing us some moments of…UNEASE?!! Well, no worries, just grab yourself a great big handful of the latest designer mood enhancers and head right off to the mall to Buy, Buy, Buy. There, doesn’t that feel better? (sure, plenty of room for all that shit in your SUV). Yeah, yeah, laugh it up, Monkey-boy… before you can say “What the F…” the Conformity Police will knock on your door and start shoving those Prozacs down your throat, aided by a swift kick from their Pay-less-shoe-source Himmler Boots. That’s Twenty-First century AMERIKA for you… the Empire of the Uber-Shrub. The Brain, I’m afraid, is destined to become a vestigial organ (this transition may have already occurred in large segments of the population, as was evidenced in the recent election, but more about that at another time). There I go, thinking again… and thinking is so last-millennium. Newthink-Amerika demands Happy, Peppy Consumers. And me, I ain’t happy… I’m only peppy after a couple of six-packs… and what I consume ain’t for sale at the mall. So where does that leave the Loudmouth???
Stay tuned… Same time …Same channel.
Posted by Loudmouth Bill at 9:21 PM No comments: 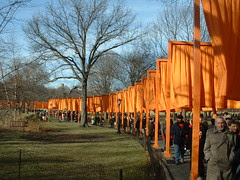 Gates Day 2, South of Great Lawn
Originally uploaded by The Magic Lantern.
OK, maybe one of them isn't art, but 7500 of 'em is art.
Posted by Em at 3:08 PM No comments: