Plain and simply, we'd run out of space for the brave fallen. Fighting for freedom, America had filled all its cemeteries and then filled all the available space in the bad lands of Montana, the deserts of Arizona and New Mexico, and any other vast tracts of land that were affordable. The countless hundreds of millions of solider's graves filled those vast plains as an enormous testament to freedom, and the lengths to which we were willing to go.

So what was left? There were still plenty of countries that had benefited from US intervention that had plenty of empty space to bury the additional war dead. And when they weren't willing to share the burden we raised the banner of freedom once more and attacked: in Algeria, in Libya and in Morocco. As these oppressive nations fell, we had room for more, so we buried the brave fallen in vast tracts stretching to the edge of the Sahara.

But still, as our young soldiers sacrificed their lives to fight for our freedoms, we needed yet more room to give honor to the fallen by burying them properly. So we attacked again: We attacked Russia. We Attacked Australia. We attacked Tajikistan, Uzbekistan and several other 'Stans as well, to make room for the fallen defenders of freedom. The tombstones stretched from horizon to horizon.

China, of course, was unwilling to relinquish land for our fallen. Neither was France or Spain or Italy. The UK, arguably, had their own soldiers to worry about. So we sent in Patriot Machines. Patriot Machines bypassed the entire lengthy process of capturing and reeducating enemy soldiers and converting them to the cause of freedom. Patriot machines looked to some kind of  like vast, mile-long steamrollers, and we sent them into France and Germany, mowing down enemy soldiers and, as their bodies rounded the roller, they were placed into simple unfolding caskets and placed into the ground behind the steamroller. A secondary roller placed a tombstone commemorating the newly harvested-and-then-fallen soldier for freedom. Where the Patriot Machines went in, vast tracts of earth were converted behind them into cemeteries of the fallen fighters for freedom.

So now, what was left?

But the problem was, first of all, the cost. And second of all, we didn't have enough dead to justify the cost.

But that issue was solved fairly quickly.
Posted by Em at 9:34 PM No comments: 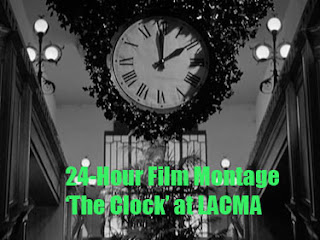 Christian Marclay's The Clock, is a 24-hour single-channel montage constructed from thousands of moments of cinema and television history depicting the passage of time. Marclay has excerpted each of these moments from their original contexts and edited them together to create a functioning timepiece synchronized to local time wherever it is viewed—marking the exact time in real time for the viewer for 24 consecutive hours. The sampled clips come from films of all genres, time periods, and cultures, some lasting only seconds, others minutes, and have been culled from hundreds of films, famous and obscure, into a seamless whole. The result, a melding of video and reality, unfolds with a seemingly endless cast of cameos. This free screening will allow The Clock to be seen in the way Marclay intended, by making it available in its entirety.
Posted by Umour Ritual Specialists at 11:11 PM No comments: