Tickets had been sold-out three weeks before the much anticipated fight, which took place in the city of Kâmpóng Chhnãng.
The fight was slated when an angry fan contested Yang Sihamoni, President of the CMFL, claiming that one lion could defeat his entire league of 42 fighters.
Sihamoni takes great pride in the league he helped create, as was conveyed in his recent advertising campaign for the CMFL that stated his midgets will "... take on anything; man, beast, or machine."
This campaign is believed to be what sparked the undisclosed fan to challenge the entire league to fight a lion; a challenge that Sihamoni readily accepted.
An African Lion (Panthera Leo) was shipped to centrally located Kâmpóng Chhnãng especially for the event, which took place last Saturday, April 30, 2005 in the city’s coliseum.
The Cambodian Government allowed the fight to take place, under the condition that they receive a 50% commission on each ticket sold, and that no cameras would be allowed in the arena.
The fight was called in only 12 minutes, after which 28 fighters were declared dead, while the other 14 suffered severe injuries including broken bones and lost limbs, rendering them unable to fight back.
Sihamoni was quoted before the fight stating that he felt since his fighters out-numbered the lion 42 to 1, that they “… could out-wit and out-muscle [it].”
Unfortunately, he was wrong.
Posted by Em at 1:48 PM 2 comments: 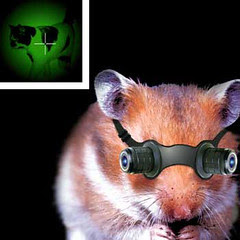 ...with nightvision goggles. Kinda levels the playing field when you think about it.

With a little help from animal rights activists, that "perfect steak" might become somewhat more elusive.