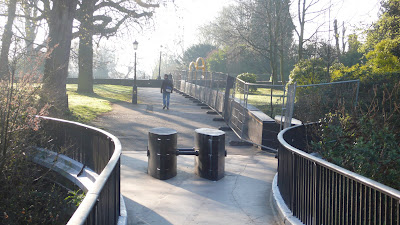 (From a morning stroll I took into Regent's park across the street this morning.)

I think Obama's over there in the American Ambassador's house. Right now choppers hoover in the night sky, and the bushes in the park across the street are being searched by the gray light beams of police flashlights.

About half an hour ago I saw a police van come to a sudden halt and half a dozen policemen pour out and grab some guy off in the trees.

Half an hour before that, three military choppers landed and then took off again in quick precession over on the main lawn in the park.

The Outer Circle Road over there is blocked off, with very substantial barricades having been put up over the last few days.

Thank God they're protecting the leader of the free world from the countless millions that would like to voice their displeasure at the actions of the government he now represents.
Posted by Em at 3:51 PM No comments: 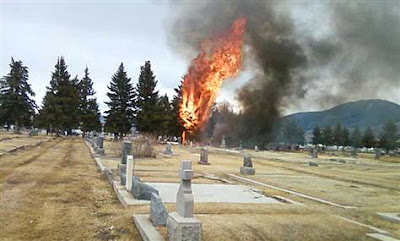 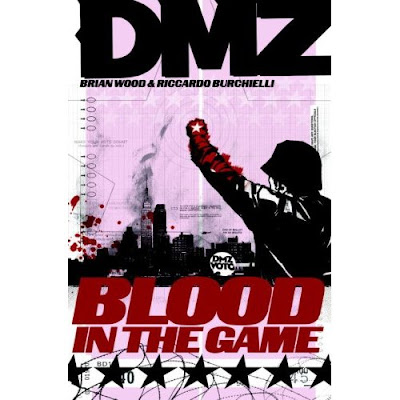 The latest DMZ. This is the future, if we're lucky. Of course, most people completely comfortable in the present largely suburban US would be horrified at the thought of living in a ruined, Chaotic Manhattan that sits between two warring Nations (The United States to the west of the Hudson, and the Free States to the east and North of the East and Harlem Rivers). But this a visualization of what the old, vibrant Manhattan of the 60s and 70s was really trying to be: A place where law was a mere negotiation between parties, and not valid elsewhere. It's crazy and dangerous but diverse and nurturing those who are comfortable making the most of a decaying infrastructure around them.

This and the first two volumes are the best, but there's no reason not to dive in with this one. They're not particularly sequential, and the art in this volume is consistently good all the way through.
Posted by Em at 5:34 AM No comments:

Melting down to prevent a meltdown

Now that we're all hoping and praying that somehow God or Obama or the economic powers that bill will save our economy and, by extension, ourselves, maybe it's time to rethink this.

Outside the US, nobody debates global warming anymore. Like thousands of reputable scientists (including dozens of Nobel prize winners), most humans understand the cause: Humans. And we know that one thing that is absolutely, screamingly necessary is that we rapidly reduce our rate of carbon emissions, or face planetary peril.

Funny enough, this global economic meltdown may have done precisely that: Reduce our emissions by shrinking the world's economy.

Of course, the "plan" to save the world's economy involved returning to economic growth, but isn't that precisely what jeopardizes our environment?

And need I say that this "plan" assumes that, by growth, the richest people on the planet will be just so stuffed full of wealth that they will allow some of that to "trickle down" and, by accident, provide the bottom tiers of world society with just enough to live on? In other words, it's a "plan" that is sloppy and inefficient as hell, and is derived from all of the countless bullshit myths of Reagan/Thatcher-economics that is really just a giant pyramid scheme after all. Except the loser in this giant pyramid scheme, the one holding the bag, is the earth itself.

So maybe the obvious conclusion is that the sanest possible course is NOT to restart growing the economy. Maybe, what we need to do is learn how to better and more evenly distribute the wealth we currently have.

That may sound like socialism or some one world government nonsense, but that's not really the point. The point is that we need to embrace a UMOUR-centric approach to the world and allow the giant economic meltdown to occur, and then learn to live in the ashes and decaying remains, making do with what will be leftover, or face certain doom.

Let me reiterate that: Embrace UMOUR or face certain ruin!

Either that or learn to swim.
Posted by Em at 4:46 PM No comments:

Angry Camels in a Car